Greetings Webtaculators! Sometimes, you just need to head out into the woods with some friends to really appreciate how great the Earth is. Hope everyone had a great Earth Day, and that you were able to get outside at some point as well. 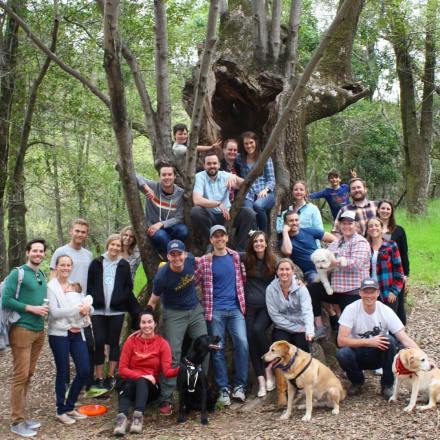 And no, we have no idea who those kids (except for the baby) are either. On to the news.

STORY OF THE WEEK (3 min. read)
What: The French Connection
Why: Because France has put itself in the position to elect basically the French female version of Trump. France, please do not do this to yourself.

ECONOMIC THING OF THE WEEK (4 min. read, but only the first sentence is necessary. I won’t make you read the whole article this time.)
What: From The Horse’s Mouth
Why: Because Papa Bear is gone. This is one of the few times I’ll actually link to a Fox article, only because the article is ridiculous in how far out of its way it goes to defend Bill “Sexual Assault” O’Reilly for his ratings success. The rest of Fox News should just fire themselves and rid the world of their nonsense.

LAW THING OF THE WEEK (4 min. read)
What: This Is What You Get
Why: Because the first vote our new Supreme Court Justice cast put a man to death. “Pro-Life” indeed.

SCIENCE THING OF THE WEEK (5 min. read)
What: March For Science
Why: Because facts matter. Here are more facts.

SPORTS THING OF THE WEEK (20 min. read)
What: The Player’s Coach
Why: Because coaching is hard. And Steve Kerr is ridiculously good at it. Yes, it helps having some of the best basketball players ever on your side, but getting insanely talented (and highly paid) adults to listen to you and buy in to a program requires a complex interplay between personality, knowledge, and emotional IQ to succeed. Speaking of great athletes, Serena Williams apparently won the Australian Open WHILE PREGNANT. I guess technically that makes it a doubles match…

TELEVISION THING OF THE WEEK (Long Read)
What: Best. Episodes. Ever.
Why: Because the Simpsons already did it.

MUSIC THING OF THE WEEK (3 min. read)
What: Everything Old Is New Again
Why: Because Incubus almost makes me feel like a high schooler again, but then I remember that I just paid taxes and that I have to go to work tomorrow and go to the dry cleaners and god damn it I’m an adult I don’t have time for this nonsense.

LITERATURE THING OF THE WEEK (6 min. read)
What: Sex And Reading
Why: Because I’ll be honest – as a straight white cis male, I have a tendency to read books mostly written by straight white cis males, that focus on plots that mostly fail the Bechdel Test (I also really liked Infinite Jest, and yes, I even read every single footnote, and no, I have never forced cocaine into anyone, Jesus what is wrong with people?). This is a problem. Not because straight white cis male authors are inherently bad, it’s just that I (and you, dear Webtaculator!) would probably benefit from getting a wider view of what all people actually write, or maybe even get an idea of how people who have a different point of view actually think. Given, this is not an easy thing! That’s why I’m asking for suggestions of books that might be outside of my wheelhouse. I realize that this is not a revolutionary idea, and that I’m actually probably way late to this party, but I have to start somewhere and sometime, right? So why not now? And even though the NY Times suggests we read the things we hate, I will never finish Atlas Shrugged, so get that garbage out of here – it is OBJECTIVELY BAD (Get it? It’s an Rand-ian pun, because she’s an objectivist… oh never mind). But most other suggestions are welcome, and I plan on reporting back here once I finish a few of them. Thanks for being part of the Webtacular book club.

VIDEO GAME THING OF THE WEEK (8 min. read)
What: The State Of Video Games
Why: Because I’m glad to find out that I’m still below the average age of game players. Also, this is why there are no more Classic Nintendos available.

INTERNET THINGS OF THE WEEK (∞)
What: Good Food/ Bad Food; They Call Me Mellow Yellow; Many Good Internet Things
Why: Because Internet.

THING YOU SHOULD GET BRIAN OF THE WEEK
What: UPDATE FROM LAST WEEK – SNES Classic
Why: Because Brian deserves it.